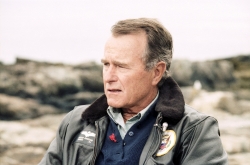 The Bush family experienced a very personal and powerful relationship with cancer ever since the tragic death of their 3-year-old daughter, Robin, from cancer. Robin's passing instilled a lifetime commitment to do whatever they could to bring an end to cancer.

In 1999, under the leadership of President George H. W. Bush and Mrs. Barbara Bush, the National Dialogue on Cancer was established. This national forum, dedicated to eliminating cancer as a major public health burden at the earliest possible time, brought together a broad representation of public, private, and nonprofit leaders, including cancer survivors and advocacy groups, elected officials and academic experts who sought to identify both barriers and opportunities and to work collaboratively on identifying national priorities for achieving the eradication of cancer.

As part of The National Dialogue on Cancer’s evolution into what was known as C-Change, in 2001, President Bush asked Robert A. Ingram, then the CEO of Glaxo Wellcome, to convene and chair a separate, complementary organization, comprised of action-oriented chief executives, and challenged them to “do something more about cancer prevention, diagnosis, and treatment within your own family as well as within your corporate family.”

Also at the request of President Bush, Dr. Martin J. Murphy took the role as Founding CEO of what would then become the CEO Roundtable on Cancer, a role he held until January 2020.

As its first major initiative, the CEO Roundtable created the CEO Cancer Gold Standard™, to encourage organizations to evaluate their health benefits and corporate culture and take extensive, concrete actions in five key areas of health and wellness to fight cancer in the workplace. In 2008, President Bush noted the program’s progress, stating:

“The CEO Cancer Gold Standard is a powerful program that advances the elimination of cancer as a public health threat. But on a more personal level, it also is a boon to employees and their families. As such, I take great pride in the CEO Roundtable on Cancer that developed the Gold Standard and I urge businesses large and small, for- profit and not-for-profit, to embrace it. This is a marvelous example of America's corporate leadership at its golden best.”

In 2011, President Bush was awarded the Presidential Medal of Freedom, the nation’s highest civilian honor, from President Barack Obama. William Weldon, Chairman of Johnson & Johnson and at that time the Chairman of the CEO Roundtable on Cancer, said the following:

“Throughout a lifetime of unprecedented public service, President Bush has taught us that an unwavering commitment to noble work is the true definition of leadership. We salute our founder and applaud President Obama for recognizing a true American hero.”