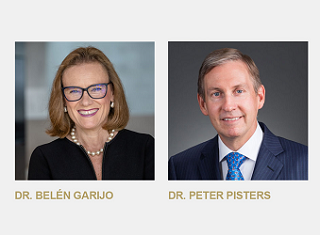 The CEO Roundtable on Cancer welcomes two new members to our Board of Directors: Dr. Belén Garijo, Vice Chair of the Executive Board and Deputy CEO of Merck KGaA, Darmstadt, Germany, and Dr. Peter WT Pisters, President of The University of Texas MD Anderson Cancer Center.

Dr. Garijo, a practicing physician who specialized in clinical pharmacology, has been appointed as new Chair of the Executive Board and CEO of Merck KGaA, Darmstadt, Germany, effective May 1. She joined the company in 2011 as Chief Operating Officer of the Biopharma business and rose to President and CEO of Healthcare in 2015.

Dr. Pisters, a renowned cancer surgeon, researcher, professor and administrator, became President of The University of Texas MD Anderson Cancer Center in 2017 after serving more than 20 years as a faculty member and medical director for the center’s expansion in metropolitan Houston. Prior to that, he served as President and CEO of the University Health Network in Toronto, Canada’s largest academic medical center.

“Doctors Belén Garijo and Peter Pisters share a passion for fighting cancer and their insights will be invaluable in our ongoing quest to eliminate this terrible disease,” said Robert Bradway, CEO Roundtable on Cancer Chairman and Amgen CEO.