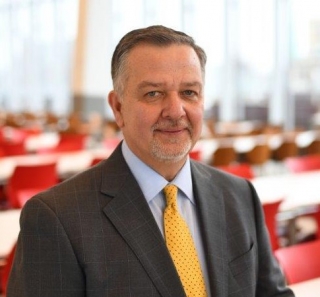 The CEO Roundtable on Cancer started 2020 with a new leadership team and a new vision to take the Roundtable and its programs to the next level.

Betty Whichard moved to the role of Chief Financial Officer, a position that Ken Lee held for many years pro-bono. We will continue to rely on Ken as a strategic advisor in the future.

The team is talking with Roundtable members, supporters and potential members to learn more about the latest challenges employers face in building a healthy workforce.

“One of the gaps we’ve placed as a high priority is health disparities,” Andy said. “CEOs through their personal visibility and their corporate profile have the opportunity to improve the health and well-being for their community as well as employees but we need to pivot from the approach we have taken in the past.”

Andy has 20 years of experience engaging business leaders to develop measures that identify the impact of the work environment on well-being at individual and organizational levels. He recently retired as chief medical officer at Prudential Financial, where he oversaw the health and well-being, safety and medical business consulting worldwide and led a strategic transformation of the business towards a more holistic view of health, including physical, emotional, social, spiritual, financial and cognitive well-being.

MaryLisabeth previously was Senior Vice President Development for the American Cancer Society Global Headquarters in Atlanta.  During almost 15 years with the ACS and its foundation over two stints, she has been a catalyst for building relationships, forging partnerships, executive engagement, mustering resources and advancing investments across the organization’s portfolio.

She also spent nine years in Higher Education Philanthropy, playing an integral part in three capital campaigns totaling $600 million, and was the executive director for Semiconductor Research Corporation (SRC). While at SRC, she developed and implemented communication and marketing in support of a $100 million annual research allocation operation among other accomplishments.

Betty joined the Roundtable and PDS in August 2018. Before that, she served as Vice President of Finance and Administration for The Medical Foundation of North Carolina, where she managed assets totaling approximately $315 million. She previously was Financial Manager of Foundations & the Alumni Association at East Carolina University. She also spent nine years as Chief Financial Officer, ERM and Operations Manager for 102 store locations for Trade Oil Co.

After Trade Oil Co. merged with WilcoHess in 2005, Betty served as the Director of Finance and Enterprise Risk Management. She also served as the General Financial and Administrative Manager for the Greenville, NC, divisional office. Betty has spent more than 17 years in public accounting serving a diverse clientele.