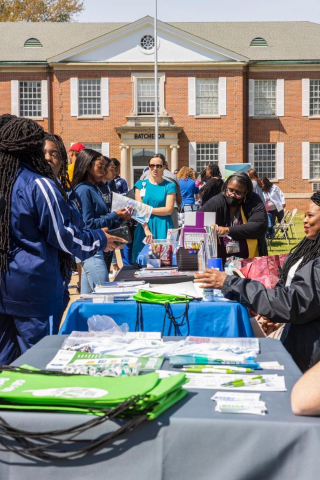 Shaw and Stillman are among the first Historically Black Colleges and Universities to join the CEORT’s “Going for Gold” partnership with HBCUs and Hispanic Serving Institutions as well as company members of the CEORT to bring awareness to cancer and expand access to prevention, detection, and treatment.

It was an exciting kickoff to Shaw University’s Go4Gold initiative with the marching band on hand, more than 200 people in attendance, special t-shirts for the occasion and participation from as far away as Jamaica, Dominican Republic, and Los Angeles.

Stillman College held the Denzel Davis Memorial Health fair on campus March 29. The health fair remembers a former student who died after a bout of viral bronchitis in 2018. He did not seek a doctor’s care after becoming ill.

The objective and mission of the health fair is to encourage Stillman students and the wider community to get a variety of health screenings and to see a doctor regularly, even if they are not sick.

“The disparity between African Americans and how health issues affect other populations is significant,” said Tomalisa Washington, director of Student Development at Stillman College and organizer of the health fair. “And, in addition to issues of access, we have a population that is very suspicious of health care professionals. So, the more we can expose our students and community to healthcare specialists is important, especially for early detection and preventive medicine.”