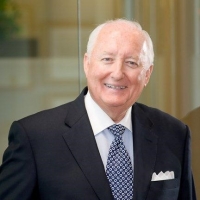 Mr. Robert Ingram is a General Partner at Hatteras Venture Partners, a venture capital firm that invests in early stage life science companies.  Prior to joining Hatteras, Mr. Ingram was Chief Executive Officer and Chairman of Glaxo/Wellcome. Mr. Ingram co-led the merger and integration that formed GlaxoSmithKline.  Upon reaching mandatory retirement age of 60, Mr. Ingram served as the Vice Chairman, Pharmaceuticals at GSK before becoming Strategic Advisor to the CEO of GlaxoSmithKline Plc.  Mr. Ingram is Chairman of the Boards of Novan, Inc., a late-stage pharmaceutical company focused on dermatology, and the Board of BioCryst Pharmaceuticals, Inc. He recently retired as Chairman of the Cree Board and the Board of Selenity Pharmaceuticals Inc. In 2013, Bob received the NACD B. Kenneth West Lifetime Achievement Award from the National Association of Corporate Directors.

At the request of US President George H.W. Bush, Bob formed and chaired the CEO Roundtable on Cancer. In 2006, he was appointed by President George W. Bush to the National Institutes of Health, National Cancer Advisory Board. In 2014, Bob received the North Carolina Award for Public Service, the highest civilian honor the state can bestow on an individual. He serves on the board of the Research Triangle Foundation of North Carolina, the Research Triangle Institute, and is Chairman of the GlaxoSmithKline Foundation.

Bob is a member of numerous other civic and professional organizations, including the Boards for the James B. Hunt Jr. Institute for Educational Leadership and Policy, CEO Roundtable on Cancer, and the Advisory Council of the Congressional Task Force on Biomedical Research and Innovation.

Bob graduated from Eastern Illinois University with a BS degree in Business Administration.

Robert A. Ingram, Founding Chairman, is a Member of the CEO Roundtable on Cancer Board of Directors

Kenneth A. Lee, serves as Chief Financial Officer (pro bono) of the CEO Roundtable on Cancer

The CEO Cancer Gold Standard is the best way I know for any organization to make a real difference in the fight against cancer.

an independent initiative of the Life Sciences Consortium

Hatteras Venture Partners is a venture capital firm formed to invest primarily in early stage companies with a focus on biopharmaceuticals, medical devices, diagnostics, healthcare IT, and related opportunities in human medicine. The firm will typically invest in companies located in the research-driven regions of North Carolina and the Southeastern United States, which are undercapitalized in comparison to New England and California.

Core to the mission of Hatteras Venture Partners is a belief that entrepreneurial innovation will create valuable new products that will transform the practice of medicine and create value for our investors. As entrepreneurs, operators, and investors, we are dedicated to the success of our companies and to the men and women who create them.

Founded in 2000 and based in Durham, NC, the firm consists of an experienced team with a broad and complementary skill set that is particularly relevant to building successful new biomedical companies. The Hatteras team brings operational experience, a successful track record, and a proven ability to enhance the value of the companies in which it invests. With five funds, the firm has approximately $350 million under management.

Hatteras is an Innovation to Impact sponsor of the Council for Entrepreneurial Development, a member of NCBIO, and an active volunteer in support of North Carolina and Southeast regional biotech activities.