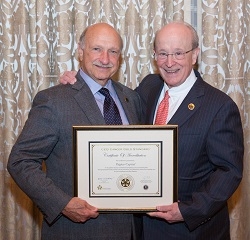 The CEO Roundtable on Cancer has accredited Pappas Capital, in Durham, NC, with CEO Cancer Gold StandardTM accreditation, recognizing its efforts to reduce the risk of cancer for its employees and covered family members.

“Pappas Capital is honored to receive the CEO Cancer Gold Standard accreditation,” said Arthur Pappas, Chairman and Chief Executive Officer, of Pappas Capital. “As longtime investors in life science companies, we strongly support the efforts of the CEO Roundtable on Cancer to raise awareness for cancer prevention, diagnosis and treatment.”

The CEO Roundtable on Cancer, a nonprofit organization of CEOs, was founded by former President George H.W. Bush to encourage and recognize employers for taking exceptional health and wellness measures on behalf of their employees and family members. Over 200 private, nonprofit and government employers in a wide range of industries have earned Gold Standard accreditation including the National Cancer Institute (NCI) and a number of NCI-designated cancer centers.

“Pappas Capital is leading by example in promoting healthier behavior,” said Robert A. Bradway, Chairman and Chief Executive Officer of Amgen and chairman of the CEO Roundtable on Cancer.  “I hope their vision and commitment to better health will encourage other employers in NC and across all industries and geographies to become Gold Standard accredited.”

To earn Gold Standard accreditation, an employer must establish programs to reduce cancer risk by taking concrete actions in five key areas: emphasize prevention by prohibiting tobacco use and supporting tobacco cessation efforts; promoting physical activity, healthy nutrition and weight management; providing health insurance options that include detecting cancer at its earliest stages, ensuring access to quality care and participation in cancer clinical trials; promoting employee awareness of these initiatives; and supporting the needs of cancer survivors in the workplace.

The Gold Standard provides a framework through which employers can lead by example. Accredited employers include health and wellness influencers like the Centers for Disease Control and Prevention (CDC) and National Cancer Institute (NCI) and noted employers of choice like Johnson & Johnson, SAS, and State Farm. They also include academic institutions like the Ohio State University and the Texas A&M School of Public Health and academic medical centers like the University of Texas MD Anderson Cancer Center and Rutgers Cancer Institute of New Jersey.

Pappas Capital has raised more than $500 million in capital and has guided the launch and/or development of more than 70 companies. Over the past six years, more than a dozen of these companies have been successfully acquired or completed an initial public offering, including the three listed above, Ultragenyx Pharmaceutical (IPO), TESARO (IPO), Plexxikon (acquired by Daiichi Sankyo), LEAD Therapeutics (acquired by BioMarin Pharmaceutical), TYRX (acquired by Medtronic) and Chimerix (IPO). Most recently, Rotation Medical agreed to be acquired by Smith & Nephew. For more information about Pappas Capital, please visit www.pappas-capital.com.

About the CEO Roundtable on Cancer

The CEO Roundtable on Cancer was founded in 2001, when former President George H.W. Bush challenged a group of executives to "do something bold and venturesome about cancer within your own corporate families." The CEOs responded by creating and encouraging the widespread adoption of the CEO Cancer Gold Standard™ which calls for organizations to evaluate their health benefits and workplace culture and take extensive, concrete actions in five key areas of health and wellness to address cancer in the workplace. For more information on the CEO Cancer Gold Standard and the no-cost, web-based accreditation process, please visit www.CancerGoldStandard.org.