The CEO Roundtable on Cancer recognized two individuals and one organization with the 2019 Dr. Charles A. Sanders Life Sciences Award for extraordinary leadership in the fight against cancer.

The CEO Roundtable on Cancer posthumously recognized Founder, President George H.W. Bush, for inspiring the group’s mission with his vision, his broad and bold challenge for leaders to look beyond existing road blocks and identify innovative and collaborative solutions to reduce the burden of cancer.

“Our father always wanted the focus of the CEORT to be on the companies and researchers, even if he was (and he was!) the visionary and driving force of the organization and its accomplishments,” wrote Marvin and Margaret Bush on behalf of the Bush family. “Thank you for all that you continue to do for cancer patients, and for giving dad a Charlie. He is smiling down on you tonight.”

Initially the Charlie award will be housed in the late President’s office, now part of the George and Barbara Bush Foundation, until arrangements are made for it to become part of the permanent display at the George H.W. Bush Presidential Library Center on the campus of Texas A&M University in College Station, Texas.

The award recognizes Emerson Health’s aid to cancer research and treatment through philanthropic giving, investment, and partnerships that help researchers tackle some of the biggest challenges impeding meaningful progress in tackling this disease.

Their efforts to develop new therapeutic options for cancer patients by acting as a bridge between leading researchers in the lab is an example of the innovation and collaboration inspired by “The Charlie’s” namesake, Dr. Charles A. Sanders. Dr. Sanders represents the tenets of leadership, innovation, collaboration and patient-centric devotion that the CEO Roundtable on Cancer and Project Data Sphere seek to catalyze.

Bradway also presented a Sanders Award to Dr. Martin J. Murphy, who helped bring to life and convene the CEO Roundtable on Cancer in 2000 and who has served as chief executive officer until his retirement in December 2019.

“While the phrase ‘bold and venturesome’ framed the President's vision of the kinds of projects the CEO Roundtable on Cancer would tackle, it also is the mantra which has guided every single hour of Marty’s work with us,” Bradway said as he presented the award.  He said Murphy has been “instrumental in turning President Bush’s vision into a thriving and productive enterprise.”

Murphy remains actively involved as both a member of the board of directors and as leader of several key projects, including his role of chief executive of the CEO Roundtable on Cancer-China. 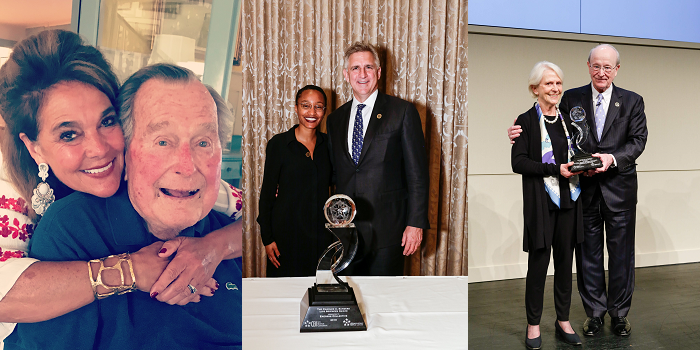