2021 RECIPIENT OF "THE CHARLIE" -- Amgen and CEO Robert A. Bradway and CEORT Founding Chairman Robert A. Ingram

Amgen and Chief Executive Officer Robert A. Bradway and former Glaxo Wellcome CEO Robert A. Ingram were recognized for their leadership with the 2021 Dr. Charles A. Sanders Award for collaborative scientific research in cancer.

Bradway accepted the Sanders Award saying, “On behalf of my colleagues at Amgen, I’m pleased to accept this award honoring our company for its innovative work in developing new cancer treatments.  I’m also humbled that the CEO Roundtable on Cancer has recognized me personally.  We are delighted to be partnering with the Roundtable in working toward our shared goal of eliminating cancer.”

“I'm so proud of what the Roundtable has become but I'm equally proud of where it's going,” Ingram said as he accepted the Sanders Award. “As leaders, one of our most important roles is to support the lives of our employees and their families by the policies and benefits we put in place. I am humbled and honored to have had the opportunity through the Roundtable to help accelerate better health outcomes for so many people.”

Amgen and CEO Robert A. Bradway

Robert Bradway is Immediate Past Chair of the CEO Roundtable on Cancer Board and is Amgen’s chairman and chief executive officer. Bradway was elected Roundtable Chairman in December 2015 and he served in that capacity until early 2021.

He became Amgen’s chairman in January 2013 and chief executive officer in May 2012. Bradway served as the company’s president and chief operating officer from May 2010 to May 2012 and was appointed to the Amgen board of directors in October 2011. He joined the company in 2006 as Vice President of Operations Strategy and served as Executive Vice President and Chief Financial Officer from April 2007 to May 2010.

Prior to joining Amgen, he was a managing director at Morgan Stanley in London, where, beginning in 2001, he had responsibility for the firm’s banking department and corporate finance activities in Europe. Bradway joined Morgan Stanley in New York as a health care industry investment banker in 1985 and moved to London in 1990.

Robert Ingram formed and chaired the CEO Roundtable on Cancer at the request of President George H.W. Bush in 2001. He remains on the Board for the Roundtable and is an active advocate for its initiatives, most recently as an Ambassador for the Going for Gold initiative with HBCUs and HSIs.

Ingram is a General Partner at Hatteras Venture Partners, a venture capital firm that invests in early-stage life science companies. He was appointed by President George W. Bush to the National Institutes of Health, National Cancer Advisory Board in 2006 and in 2014, he received the North Carolina Award for Public Service, the highest civilian honor the state can bestow on an individual.

Prior to joining Hatteras, Mr. Ingram was Chief Executive Officer and Chairman of Glaxo/Wellcome. He co-led the merger and integration that formed GlaxoSmithKline. Upon reaching mandatory retirement age of 60, Mr. Ingram served as the Vice Chairman, Pharmaceuticals at GSK before becoming Strategic Advisor to the CEO of GlaxoSmithKline Plc.

Mr. Ingram serves on the board of the Research Triangle Foundation of North Carolina, the Research Triangle Institute, and is Chairman of the GlaxoSmithKline Foundation. He also is a member of numerous other civic and professional organizations, including the Boards for the James B. Hunt Jr. Institute for Educational Leadership and Policy, and the Advisory Council of the Congressional Task Force on Biomedical Research and Innovation. 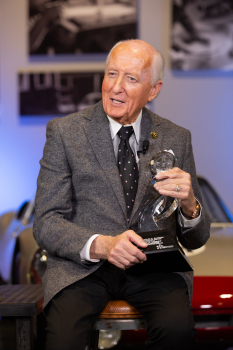